A Beginner’s Guide to Sketch Drawing：Nose

Painting is an art that can express the beauty of nature and show our inner feelings. In various painting, sketch is a way to unfold the true structure of everything, especially for realistic portraits. However, in order to get a fantastic sketch, besides necessary tools such as paint palette, stretched canvas, graphite pencil and drawing sketch pad, we also need to learn some fundamental knowledge about how to draw a sketch. Therefore, today, we intend to share some ideas of drawing the nose, hoping you can obtain precious experience.

Structural characteristics of the nose

The nose is the most prominent part of the face, which is the key of shaping. It is composed of nose root, nose bridge, nose head, wings of a nose, nostrils and nasolabial groove.

All the changes of light and shade on the nose surface are closely related to its structure. For the ups and downs of the middle line of the nose, we should combine the shape of the nasal bone and the plaster nose to understand. In the performance of the nose, we should pay attention to its horizontal and vertical changes in depth. The shape of the nostrils can not be treated as a simple circle. The full nose head can be drawn first, then the nostrils can be drawn in contrast. 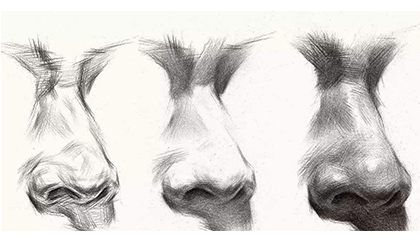 Rules of shading the nose

2. The nose is the most front part of the nose space, so the relationship between the square, the depth and the deficiency of the light-dark boundary at the bottom of the nose should be emphasized.

3. Influenced by light and nose shape, the nose and nose wings will generally have a narrow gray surface between the light surface and the light-dark boundary. This gray surface as a transition can better turn the shape around and make the shape more rounded.

2. You should pull the black, white and gray nose apart generally, and the structure of the lateral ridge of the nose bridge can not be ignored.

3. The nose overlaps the left wing of the nose because it is the light part. And the transition between them is gentle so the complete outer edge of the nose can be handed over.

4. The tone on the nose can be rubbed slightly into a light gray tone and then fine lines are arranged on it with a sketching pencil to show the smooth texture of the nose.

Gender characteristics of the nose

The male nose is usually straight and the turning is clear. The nose is square, wide and large. The shape of the nose wing is also square, and the nasal wing groove is obvious. Highlights are usually summarized as small cubes, reflecting compact muscles and enhancing block feelings.

Relatively speaking, the female nose is more slender and dedicate with softer turning. The nose is round and the shape of nose wing is round. The light-dark boundary transition is gentle and the dark part reflects light greatly.