What Style of Painting is Van Gogh?

Vincent Van Gogh is a Dutch post-Impressionist painter who is good at oil paint. His representative works include The Bedroom, Self-portrait Series and Sunflower Series. Next, I will introduce some characteristics of Van Gogh's works.

Van Gogh's works are full of natural sympathy and suffering consciousness. For example, in the early days of Van Gogh's artistic career, the most painted subjects were the gloomy scenes of the mining area and the miners who worked. In Eden's time, the roll of sunset, the farmers and farmers in the sun appeared more in his works.

By the time of The Dorente and The Hague, Van Gogh's works began to show the frequent occurrence of weeping women, old trees, orphans of the elderly in urban relief homes, old horses driving, working farmers and so on.

Van Gogh was very enthusiastic about farmers, their wildlife and rural scenery. He loved everything about farmers, especially sunflowers, wheat fields, orioles, peas and so on. He often chooses these images as his subject matter of painting, which is why he is called "the purest painter among painters". Compared with those magnificent and brilliant paintings, Van Gogh's paintings are more simple. He devotes his unlimited passion to these simple flowers and fields, which makes the paintings produce an art magic that can not be surpassed and imitated. Van Gogh has painted many sunflower paintings. Although the number of sunflowers and the posture of flowers are different each time, they all reflect a full and vigorous.

In addition, Van Gogh often chooses wheat fields as his subject matter of painting. It seems that his paintings of all kinds of wheat fields can perceive the sadness and vicissitudes of the wheat fields. For example, Van Gogh's "The Rye under the Dark Clouds" written in Orville is about the continuous wheat fields in bad weather, which conveys the feelings of desolation, loneliness, depression and depression. Again, "Crow in the Rye" takes the Rye field as the main theme, and adds a group of black crows above the Rye field, thus it can show a deep sense of despair and deathly silence. Of course, in addition to these two themes, Van Gogh's paintings also involve many subjects and images, but without an exception, they are simple and unadorned, and closely related to life. 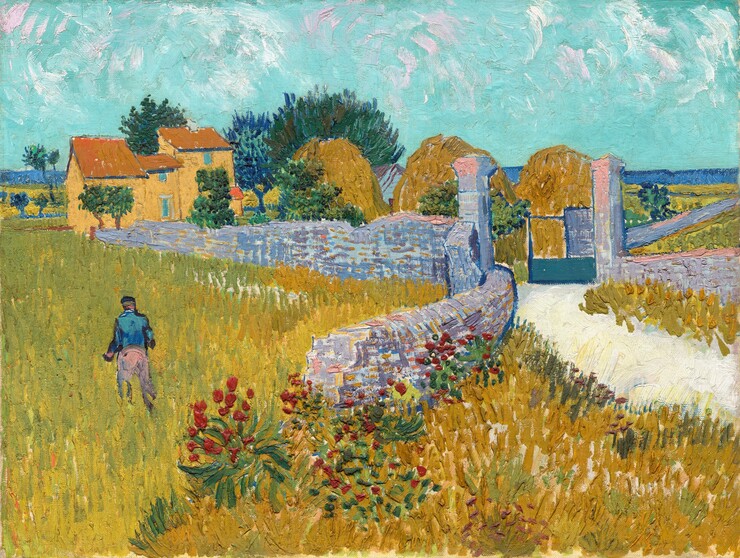 Van Gogh is a colorist painter. The oil colors in his paintings are bold and exaggerated, which deeply influenced the expressionism and the beast painting in the 20th century. Specifically, the bold colors in Van Gogh's paintings are mainly manifested in the following three aspects: decorating with bright and bright exaggerated colors, decorating with the contrast of large blocks, and buffering with absolute black and white.

Van Gogh's paintings pursue a wild form. Thick and rough brush strokes bring a straightforward and simple way of expression with certain strength and intensity. They emphasize the transmission of "god" rather than "form". Because Van Gogh did not receive professional art education, in the shape of their own inner feelings as the main criteria. In addition, Van Gogh lived in poverty, hardship and disease all his life, which had a profound impact on his psychology. Therefore, the images in his paintings are distorted, wild and extensive. It is these factors that bring about Van Gogh rich emotions and profound knowledge.

Let’s take The Starry Night as an example. The painting was created during Van Gogh's stay in Santa Remi Sanatorium. During this period, Van Gogh's illness was sometimes good, sometimes bad. and his mind was sober and confused, so his painting lines were rougher and his brushwork was more casual. In this picture, Van Gogh uses a vivid and stubborn short-line pen to create a surging and rotating universe. Ten stars in the night sky are also composed of flowing lines of different lengths and thicknesses. The close-range cypress image is like a torn and burning Gothic church. The shapes of the night sky, stars and cypress trees in the picture are very exaggerated, wild, strange and uncertain. In addition, this strange and wild shape makes people feel like they are trapped in a yellow-blue whirlpool, but there is a feeling of despair and terror.

Van Gogh's works, which once confused most of his contemporaries, have now been printed on postcards, calendars and become best sellers. Get professional oil painting sets, please contact us. Hangzhou Medo Import and Export Co., Ltd. is a professional art material manufacturer, who producing oil color set and oil color paint brush with best price and high quality. Welcome to your messages.